It is exciting to see that Mobility-as-a-Service is now becoming a truly global movement. There are more and more people, companies, organizations and governments recognizing that the future of mobility can be profoundly different than its past. The unity of MaaS movement comes from the shared belief that embracing the power of digital technology can lead to significant new benefits in the transportation system and therefore improved quality of life – in particular in cities.

Today, there are over 50 serious attempts globally to come up with a “MaaS solution”. It’s still early days which is shown by the fact that all attempts are quite unique, with different stakeholders, different business models, and different key objectives. We are still far away from having a simple recipe for a successful MaaS. This made it even more interesting for me to actively participate and learn from a discussion in Taiwan, where the focus of the discussion were their two key pilot projects to embrace MaaS in their country.

First of all, the discussion about MaaS in Taiwan was part of the annual ITS Taiwan event, where about 200 experts from the transportation field meet to discuss key topics in this area. Taiwan has two MaaS projects running in two of their main cities: Taipei and Kaohsiung. Project leads were invited to present their activities, as were several professors who discussed the main points related to MaaS. I had the opportunity to present what Europe is doing in terms of embracing the concept of MaaS. 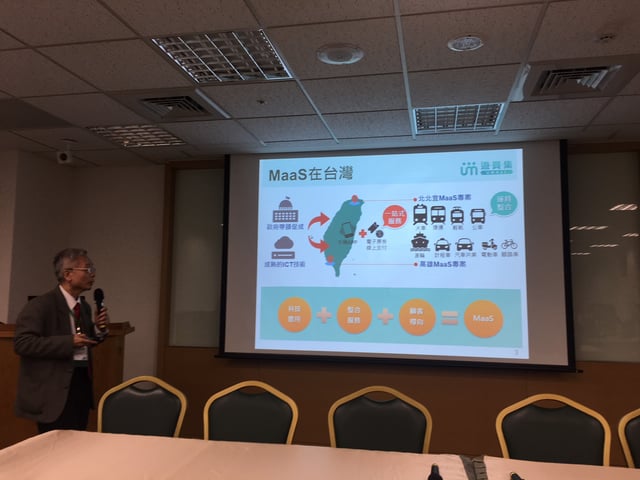 The more you travel outside your base ecosystem, the more obvious are the differences in challenges, objectives and approaches of MaaS initiatives around the globe, While MaaS is often compared to Spotify and Netflix, different regions need quite different songs and movies and these need to work well with very different physical infrastructure. Also the maturity of public transport varies a lot between regions, which is important as public transport is considered by many as a back-bone of MaaS. A one size fits all approach will not work.

Kaohsiung, for example, is a city with 2 million people and 2 million motorbikes. This certainly cannot be compared to Finland, where the MaaS movement originated, or Slovenia where I come from. Nevertheless, they see a big benefit in MaaS that could make mobility safer for their citizens.

Among Taipei’s key challenges is its unique geographical and infrastructural position which is responsible for severe congestion issues on the single main road that connects Taipei to Yilan County. Solving this issue is one of the primary objectives of MaaS in Taipei.

It was interesting to listen to the discussion within Taiwan’s ITS community. The main driver of the MaaS movement is the local government which will also provide funding. There are huge differences regarding this aspect among the cities and regions I have visited so far – ranging from cities that want to leave it all to private business and then regions like Taiwan where the local government wants to invest as well as control the activities.

One of the key topics we discussed was also how do you know whether a MaaS project is successful. This was particularly interesting for me as we are in the middle of evaluating different frameworks for measuring maturity and success of MaaS implementations (this is part of the Single Market working group within MaaS Alliance). One professor from Taiwan had a brilliant and very wise answer – the best measure for MaaS success is the smile on people’s faces. I am very careful with frameworks and measurements for MaaS maturity and success, but I could certainly agree with this one.

Photo: Discussion about MaaS projects and how to make them successful.

MaaS is essentially a digital technology proposition and as such, the speed of the development can be so much faster than in the physical world. However, as such it is also so much easier to get it wrong quickly. Within last few years we have seen how some major players in mobility services managed to gain massive traction by delighting customers with innovative user experience and value proposition. However, we have also seen how easy it is to lose momentum and in many ways this comes from lost smiles on both sides of the digital platform – the consumers of mobility services as well as providers. Urban transport system is a complex living systems that changes with time. As such its optimization is difficult and there will be no simple recipes for success. It is about finding a Nash equilibrium where transportation system optimizes not just individual decisions but also the decisions of all citizens combined. This is where local government and public transport can play a major role. However, at the same time it is important that the transportation system embraces the innovation from private sector, otherwise the optimization might be quickly limited to legacy technology and business models. The speed of digital technology innovation is such that no single company or government can do it alone.

In addition to the two public driven MaaS initiatives in Taiwan I have also learned about Uber’s plans to work with local bike-sharing company to provide integrated mobility services. While MaaS is many times seen as a top-down initiative I believe such bottom-up approach can actually provide great value to citizens as well. It will be extremely interesting to observe how in next years the top-down and bottom-up initiatives develop and in particular if they will merge into one offering, which would probably be in the best interest of the citizens.

At the end, it was also time for some fun and I have to say this was maybe the most revealing side of the wonderful Taiwanese culture. Everyone from deputy transportation minister, presidents of different local companies, professors, and sometimes even competitors were singing karaoke and being very friendly and openly talking to each other. And at the end – the leftover food from the party is packaged to be taken away home and not wasted. What a humble nation! Nobody is too proud or too important to waste resources. I believe we can learn a lot from Taiwan. I believe such culture will lead to a successful MaaS – despite the fact that maybe the path chosen will be different than in many other regions around the world.