A recent article in Financial Times examined the topic of big data in the airline industry. I had the honour to contribute to the article together with a number of airlines sharing their views. I would like to elaborate further on this topic and expand it with my vision for the future of airline industry.

It is no secret that the main issue of airlines is profitability. This has been the case in the past and has not changed significantly in recent years. We can look at the poor returns (as shown below) or just name the airlines that went bankrupt over the past few years. Either way, we come to the same conclusion – it is a very competitive market where profitability is not taken for granted. 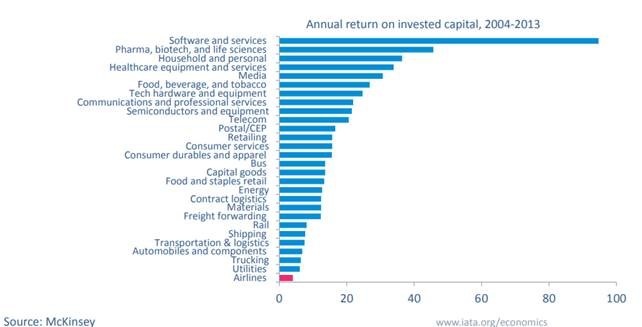 Nevertheless, some airlines are more successful than others. I am delighted to see that our partner – Ryanair – is the global champion in terms of profitability. I do believe that they offer an important lesson for the industry. While many still see Ryanair as a company that is focused solely on reducing costs, they are missing a very important point. Ryanair significantly changed its strategic direction with their “Always Getting Better” program and – maybe even more importantly – the company is becoming a leader in the airline digital platform economy through its “Amazon for Travel” program based on the MyRyanair platform. We are very proud to see that the platform, developed by our company, has over 43 million users and is proving to be an excellent foundation for Ryanair to start focusing on its digital assets.

Looking at the details behind financial results of several different airlines, I believe that we are entering a new phase in the evolution of the airline business. I believe profits coming from seats on the plane and elements closely associated with the physical plane are a thing of the past. The digital platforms have commoditized the traditional airline business to the point of almost perfect competition, meaning no player generates more than minimal profits at best. The profitability chart summarizes the gloomy situation nicely.

However, I believe that the future prospects for airlines have not been as good as they are right now in a long time. I am certain that some airlines finally understand the power of digital technology. While digital technology made their core business a commodity, it can also raise them to a completely new level if they use it in the right way. Airlines are starting to realize that they can claim their fair share of the digital platform economy; however, they need to step out of the comfort zone of their legacy business models. The blue ocean is only there for them if they make bold moves to become true digital platform players. Obviously, the market already has strong players, making it essential that airlines leverage their footprint from traditional airline business, which gives them a unique unfair advantage over digital-native competitors.

One of the core differences between digital and traditional economy is the complexity. While the traditional economy has established business models that change slowly over time, digital economy appears as a living structure which is constantly changing. In such a dynamic environment, it is very easy to get lost and make false strategic moves. Often, airlines which invest the most in IT, are the ones that have the least to show for it. It’s just too easy to develop new exciting features that should delight customers in theory. However, many times such functionality is ignored by the users or just does not lead to a positive business impact.

I believe that within the increased complexity of the digital platform economy, it is essential to focus on the basics: increasing customer touch points and their engagement and, most importantly, monetizing it properly. In the hyper-personalized complexity of the digital economy, there will be no better measure of customer satisfaction than the votes they cast with their wallets. This is the big difference compared to the traditional economy. I find myself bothered by the lottery ticket I am offered each time I fly with some airlines. I have never bought it and I will never buy one. Please, stop wasting my time and your time, my dear Airline. However, when it comes to digital, it is a very different situation. The power of big data and AI makes it simple to offer potential customers only the things where the chance of conversion is high. Therefore, a strong focus on actual conversion directly leads to increased customer satisfaction. A flight attendant simply cannot know that I don’t like lottery tickets but love a glass of red wine. “How did you know?“ This is the question I would expect passengers to ask if an airline used the power of digital platforms in the right way, and started targeting passengers individually. The more conversions an airline gets, the more they will know about their customers and the better they can serve them in the future. The airlines with a strong focus on retailing will have a big advantage when transforming into digital platform economy.

And while I used the example from the in-flight service above (lottery ticket vs. red wine), the key power of airline digital platforms will come when they are connected to the ecosystems outside of the plane. The logic is very simple – airline passengers are very valuable to many businesses at the destination (and during the whole journey as well). If an airline can connect these businesses in a nice way to the passenger, the airline will create a better customer experience. Most importantly, the airline can get its fair commission as the enabler of the ecosystem. Again, the higher the volume of passengers, the more data points airlines will have on their passengers to deliver a better service.

I believe the commoditization of the core business will largely change the direction of innovation activities within airlines. Airlines will focus less on how to make money within the plane (because this has been already largely exploited) and will explore profitable options outside it. Here, the digital technology brings conceptual changes as it allows building a new kind of ecosystem, where seemingly independent businesses can create win-win business relationships without friction and almost instantly. As I see it, airlines are a major enabler of the travel ecosystem and should take a leading role in this business transformation. Maybe not all of them want to become Amazon for Travel, but the concept is largely the same. It is about leveraging the power of digital technology to improve profitability in a way that actually strengthens the brand and the core service provided by the airline.